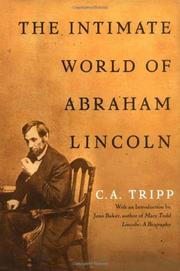 THE INTIMATE WORLD OF ABRAHAM LINCOLN

Don’t tell Ralph Reed or Jerry Falwell, but the Log Cabin Republicans are on to something big.

The secret, according to the late Kinsey Institute sex researcher Tripp, was that Abraham Lincoln was gay. Or mostly so, as Tripp qualifies with careful provisos: by the Kinsey seven-point scale, in which 0 equals entirely heterosexual and 7 equals entirely homosexual, Lincoln rates a 5, “predominantly homosexual, but incidentally heterosexual.” That incidental tendency, of course, netted Lincoln a wife and four children, but Tripp argues that the Railsplitter had little use for or interest in women or children all the same, preferring the company of men, such as bodyguard D.V. Derickson, who shared Lincoln’s bed and nightshirt in the White House when Mrs. Lincoln was out of town. The evidence? Well, there were those eyewitness accounts of Derickson wandering around in Lincoln’s clothes. More incidentally, Tripp notes, are curiosities, such as the fact that Lincoln almost never went to church, though, when Mary Todd Lincoln was away, he was very likely to attend sermons with Derickson on a Sunday morning. Similarly, Tripp continues, Lincoln showered affection on one Elmer Ellsworth, who was inconveniently “definitely and explicitly heterosexual,” and who died very early in the war, both eventualities bringing yet more sorrow to the already melancholic president. And then there was Lincoln’s long-time dalliance with fellow lawyer Joshua Speed. Not to mention Mary’s general bossiness, bound to drive a fellow away from the hearth and into the arms of boon companions. Tripp approaches the matter with apparent sympathy, but his evidence is surrounded by much speculation and much poorly developed argumentation—the latter likely because the author died before revising the manuscript. In the end, readers will wonder about the ultimate point: Unless it helps correct current injustices, does it matter where Lincoln hung his stovepipe at night?

At odds with much scholarship, including recent work like David Donald’s “We Are Lincoln Men” (2003)—readers will want to approach this with some reserve. But an intriguing thesis all the same.