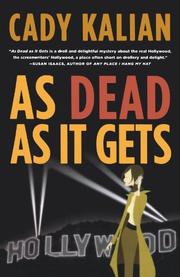 AS DEAD AS IT GETS

A journalist writes a screenplay with a sassy, sexy heroine whose adventures turn out to be surprisingly similar to her own.

When Maggie Mars’s lover Joe Camanetti moved from the NYPD to the LAPD, their affair died a slow death. Now living on the West Coast and serving on the board of the Creative Artists Union, she’s involved with wealthy Henrik Hudson, a defense lawyer with movie-star looks. When the Union’s Executive Director Roger Urban is found dead, Maggie’s investigative reporter instincts click into high gear to the horror of Camanetti, who catches the case. She starts getting anonymous notes warning her to forget the murder as she digs up the dirt on many people who were involved with Urban both at work and in his kinky private life. A second death, apparently a suicide, closes the case for the police but not for Maggie, who follows the trail from L.A. to New York and back again. Her father and Camanetti are constantly after her to quit once the case is closed, but she just can’t help following her instincts—and the contacts of her housemate, her gay friend Lionel—to conclusions that almost get her killed.

An uptown Stephanie Plum seesaws between two sexy guys and gets into new trouble every day. Maggie’s debut could mark a great day for fans of Janet Evanovich.