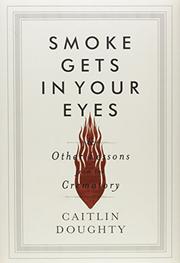 SMOKE GETS IN YOUR EYES

And Other Lessons from the Crematory

A 20-something’s account of her life as a professional mortician.

Doughty's fascination with death began in childhood, but it wasn’t until she got to college that she dropped all pretenses of “normality and began to explore “all aspects of mortality” through her work in medieval history. Intellectual exposure to death and the human rituals associated with it eventually led to a decision to pursue a career as an undertaker. With an honesty that at times borders on unnerving, Doughty describes her experiences tending to dead people that, through her colorful characterizations, come to life on the page to become more than just anonymous stiffs. The author offers an intimate view of not just the mechanics of how corpses are treated and disposed, but also of the way Americans have come to treat both death and the dead. Throughout the last century, the rise of hospitals and displacement of homes as centers of life and death sanitized mortality while taking it out of public consciousness. “[T]he dying,” writes Doughty, “could undergo the indignities of death without offending the sensibilities of the living.” In the vein of Jessica Mitford, Doughty also casts a critical eye on the funeral industry and how it has attempted to “prettify” death for the public through cosmetic excesses like embalming. Yet unlike Mitford before her, Doughty reveals that what the public is ultimately getting cheated out of is not money, but a real and wholesome experience with death. For the author, the way forward to a healthier relationship with the end-of-life experience is to reclaim "the process of dying” by ending the ignorance and fear attached to it. Death is not the enemy of life but rather its much-maligned and misunderstood ally.

A witty, wise and mordantly wise-cracking memoir and examination of the American way of death.