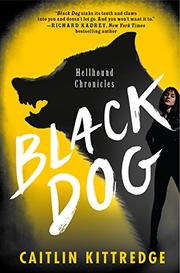 From the Hellhound Chronicles series, volume 1

The first book in a new series by Kittredge (Dark Days, 2013, etc.) is the tale of Ava, a girl-turned-hellhound who is convinced to rebel against her abusive master by a necromancer who has an agenda of his own.

Foulmouthed, black leather–clad, motorcycle-riding Ava tears through towns lustily ripping bodies apart and “scar[ing] the shit out of bottom-feeding predators.” As a hellhound in service to an abusive master, Gary, one of many reapers responsible for collecting souls from the damned, this is all Ava is programmed to do. But when her latest assignment goes awry, Ava is captured and tortured by a necromancer named Leo who wants her to kill Gary. Leo sweetens the deal by informing Ava that the reaper’s death will mean her freedom. What does Leo want in return? For Ava to steal Gary’s scythe so Leo can kill his own father, a necromancer who will not stay dead any other way. Knowing she's so badly messed up this latest soul-fetching assignment that Gary will kill her anyway, Ava agrees to Leo’s plan. But you can never trust a necromancer, and after a skillful double-cross ends up with Gary dead and his boss—none other than the 1,000-year-old demon Lilith—more than a little put out, Ava and Leo set off with Gary’s little black book of lost souls, determined to come up with a plan to outwit Lilith, take care of Leo’s father and keep them both alive in the process. But one can’t help but wonder: Why doesn’t the all-powerful Lilith just exterminate the pair with her fearsome abilities at any second? And will it be Leo or his father who has the last word in their game of cat and mouse?

A fast-paced read perfect for lovers of dark fantasy that ultimately raises more questions than it answers.