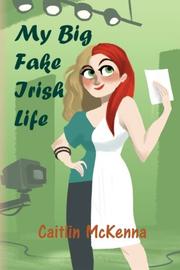 McKenna’s chick-lit novel presents a woman who assumes a new identity to follow her dream of becoming an actress.

The storyline follows Linda Symcox, a blonde American actress struggling in Los Angeles as she finds that despite her classical training, she can’t land a job; as her agent, who drops her early on, tells her, she just doesn’t have “it.” After realizing that a pretty accent could make all the difference in her heretofore floundering career, she takes inspiration from a recent trip to Ireland and reinvents herself as an Irish redhead named Meghan O’Connell and almost immediately gets cast as the female lead in a new television series. Predictably, hijinks ensue. Almost immediately, she falls for her co-star, who had met her before her big transformation, and she is terrified that he will recognize her; she must spend all the time she isn’t training or filming studying Irish culture in order not to be caught unawares by an innocent question from the cast or crew; and as the show becomes more popular, people are desperate for details of “Meghan’s” personal life and Linda finds herself scrambling to fill in the blanks, ultimately piling lie upon ludicrous lie. The story reads easily enough, although there are few surprises in the plot’s twists and turns, but certain aspects fail to ring true. For instance, as exciting as Americans do find accents, particularly those of Great Britain, it seems unlikely that after working together for several months, “Meghan’s” co-workers would continue to ask her nothing but Irish trivia questions. Also, there is a frustrating inconsistency in McKenna’s description of the scenes from the television series (which, incidentally, often nicely parallel the tension between Linda and Michael); she sometimes refers to the actors by their given (or “given”) names, and sometimes by the names of the characters they play. Nevertheless, the novel is charming enough and an intriguing window into the tense challenges of maintaining a false identity. A light, fun romp that may nicely translate to a TV show or movie.