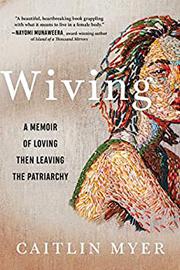 A Memoir of Loving Then Leaving the Patriarchy

Growing up in the Church of Jesus Christ of Latter-day Saints, a woman wrestles with faith, family, and her own mind.

Poet, essayist, and fiction writer Myer was shaped by “the limited characters available to women in Mormonism: fallen woman or wife.” In her starkly revealing debut memoir, she recounts her struggle to define herself beyond those two roles, which, she came to realize, were “only a highly concentrated version of America.” Even outside of her religion, she was expected “to be the dentist’s wife, the artist’s wife, the killer’s wife: whoever I hook myself to stains me with his choices.” Her struggle was intensified by her family. Her bipolar mother retreated into depression, which Myer later understood to be rage turned inward; her father protected his wife from their children, leaving Myer feeling abandoned. Molested by a teenage cousin when she was 7, at 12, she encouraged the physical attentions of a 15-year-old neighbor, let the paperboy “(sin sin sin) feel my breasts,” and suffered a sexual assault by a 26-year-old man. That traumatic experience didn’t stop her from going to a man’s hotel room when she was “maybe thirteen….We keep our clothes on, mostly.” Myer calls these encounters “wiving.” As she writes, “I have been wiving since I was a little girl. I am good at wiving. I fail at wiving. Both are true.” Seeing a man happy “will light me up all my life, no matter how many times it is the exact wrong thing to do, the wrong man to cheer.” That is her job, as written in the Scriptures: “and if you are to be good at it, you have to start practicing early.” Promiscuousness also assuaged a fear that she was unlovable, “that, without another person to see me, I disappear, I cease to matter.” Myer recounts in candid detail her process of self-discovery and eventual, hard-won empowerment.