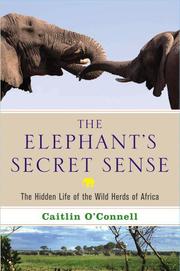 The Hidden Life of the Wild Herds of Africa

Entomologist O’Connell’s memoir tracks the work that led her to uncover a previously unknown means of elephant communication.

The author and her biologist husband, Tim, arrived in Namibia’s Etosha National Park in 1992. He was to conduct an aerial census of the local elephant population, while she would focus on their behavior, working with local farmers to come up with solutions to the animals’ extensive crop-raiding. For two months each year, the couple would set aside their community-development tasks to observe the elephants. By 1992, researchers had established that elephants produced low-frequency sounds; O’Connell hoped to place these vocalizations in context and analyze their meanings. Her work soon paid off. After recording a matriarch’s panicked response to nearby lions, O’Connell designed a trip alarm that would play back the recording when the herd approached the farmers’ fields. The crop-raiding soon slowed. In the midst of her study, O’Connell noticed that the elephants appeared to be using their forefeet to sense vibrations; using her previous research on the seismic songs of the plant-hopper, a tiny Hawaiian insect, as a guide, she was able to prove that elephants pick up vibrations through their feet, vibrations that travel through toe bone, legs, shoulders and, finally, into the middle ear cavity. Using bone conduction, elephants can communicate seismically, sensing the approach of friends or foes. While O’Connell’s scientific conclusions, gathered over 14 years, make for good reading, her account of life in Namibia is distressing. Frustrating encounters with suspicious villagers gave way to meetings with cynical foreign-development workers, and the devastating AIDS epidemic overshadowed all. “God’s country is full of broken dreams!” one USAID employee aptly intoned.

A remarkable account of elephant communication, though difficult in spots.