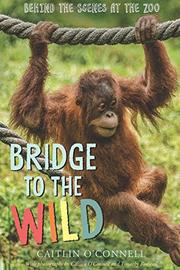 BRIDGE TO THE WILD

Behind the Scenes at the Zoo

Targeting young readers as “the next generation of conservationists,” O’Connell shares observations, research, and photographs (taken with Rodwell, her husband) from a week spent with the animals and keepers at Zoo Atlanta.

Scientist O’Connell’s field work with elephants in Namibia has engendered several popular works, including Sibert honoree, co-authored by Donna M. Jackson, The Elephant Scientist (2011). Here, she unfurls her day-by-day, behind-the-scenes experiences at the zoo. She observes elephants, pandas, and the large populations of gorillas and orangutans, all under the guidance of mammal curator Rebecca Snyder. Other keepers introduce her to their work with reptiles and birds, and she accompanies the zoo’s vet on her rounds. In addition to presenting absorbing facts about pandas, Komodo dragons, lion tamarins, and other species, O’Connell acquaints readers with scientific information and methodology. She explains the significance of dominance hierarchies, parenting behaviors, the sensory adaptations of reptiles, and much more, and she introduces types of data sheets used to observe animals. O’Connell presents the modern zoo in a clear light, acknowledging the challenges of replicating favorable conditions for the social, physical, and reproductive health of the exhibited animals. Her final day at Zoo Atlanta occurs on Endangered Species Day, affording an apt backdrop for highlighting the severe threats posed by global habitat degradation and poaching.

An important, engaging introduction to a modern zoo, its dedicated staff, and the fascinating animals in its care.