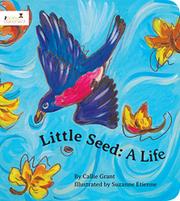 The life story of a seed is set in a biblical context.

Readers are introduced on the first page to Little Seed, who will serve as the uninspiring and often hard-to-spot main character of this tale. It floats to the ground and is buried in the soil until winter arrives and the earth freezes. Lest readers worry about Little Seed at this point, they are offered the startling—for no religious or spiritual context has been thus far established—reassurance that “God gave Little Seed everything it needed. Its hard coat protected it. Little Seed was safe.” When spring comes, Little Seed’s softened shell splits open, and a sprout and roots begin to grow. At this point, the illustrations present several small seedlings, making it impossible to even identify Little Seed. When summer rolls around, Little Seed has become a sunflower that must reproduce in fall to fulfill its destiny. The final page spread attempts to tie everything together by offering a quotation referencing gardens and seeds from Isaiah 61:11. The illustrations, an unusual mixture of realism and impressionism, are plagued by inconsistencies. The permanent fixtures of Little Seed’s background, for example, seem to change from season to season, though presumably it remains rooted in the same spot.

Lacking in consistency and coherence, this effort remains an interesting concept unsuccessfully executed.