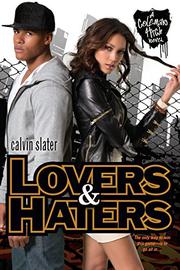 From the Coleman High series, volume 1

A gritty yet heartwarming debut for teens chronicles the coming-of-age of 16-year-old Xavier Hunter, who navigates new love amid the challenges of drugs, gangs and other woes in inner-city Detroit.

Xavier’s general compassion and particular interest in the attractive Samantha become readers’ entryway into a teenage underworld where conflict meets him at every corner. His path to a solution will affect not only his own future, but the futures of those he cares about the most. Using a voice that comes directly from young Detroiters, Slater (a pseudonym) mixes in the humor of the dozens, the African-American oral tradition in which two competitors go head to head in a competition of good-natured insults, to color his characters with authenticity. The novel digs deep into the lore of the Detroit inner city to offer an abrasive narrative populated by many stereotypes and one-dimensional clichés; these throw Xavier’s determination to go in a new direction in sharp relief. Slater presents tough situations that lack strong context, which, combined with the stereotypes, may serve to reinforce rather than break down unwarranted assumptions.

Readers who bring to the novel an understanding of the circumstances impoverished inner-city life can beget will find inspiration in Xavier’s story.