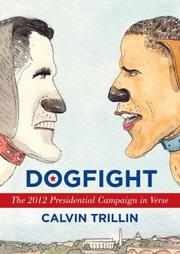 The 2012 Presidential Campaign in Verse

Again exercising an uncanny knack for producing poetical discourse on the political playing field, Trillin (Deciding the Next Decade: The 2008 Presidential Race in Rhyme, 2008) offers pithy ruminations and droll observations on the Obama-Romney race. He justifies the canine-inspired title with a short opening rhyme comparing Romney’s 1983 road-tripping vacation with pet Irish setter Seamus strapped to the roof of the family car to Obama’s Indonesian boyhood when he sampled dog meat. Sprinkled in between Trillin’s play-by-play analyses of both campaigns are encapsulated poems borne from media headlines. These snarky, bite-sized morsels skewer the likes of Senatorial candidate Christine O’Donnell (“Until you came along one day, old witchcraft jokes had been passé”), Rick Perry (“with even more impressive hair than Kerry”), “holier than thou” Rick Santorum, Newt Gingrich (“a crafty wheeler-dealer. His baggage, though, would fill an eighteen-wheeler”) and Donald Trump (“once he’s had his say…and say…and say, he, blessedly, will finally go away.”) Not all the couplets and cadences churn smoothly; a few clunkers feel overly trivial and forced, as if the author became bored with the political semantics. As a collective work of creative nonfiction, his harmlessly sarcastic poetry is skilled, and the book will serve as a good complement to Elinor Lipman’s uniformly clever election-season poem-a-day chronicle, Tweet Land of Liberty (2012).