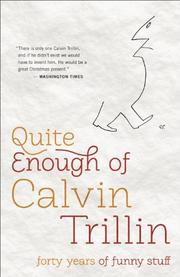 QUITE ENOUGH OF CALVIN TRILLIN

Some of the best pieces of the esteemed humorist’s long career.

Trillin (Trillin on Texas, 2011, etc.) is best known for his writing on food and politics, and there's a feast of both in this collection of four decades of work. In “Missing Links,” an essay on the Cajun dish boudin, he reveals a deep knowledge of regional cuisine while delivering wry takes on his culinary obsessiveness. In “Eating With the Pilgrims,” he condemns bland Thanksgiving fare and lobbies for spaghetti carbonara as a replacement dish. As for politics, the book includes plenty of his light verse on legislators, mostly skewering Republicans. On Tom Delay: “Corruption’s in his DNA. / It dominates his résumé.” On John Boehner: “Can anything be said for Speaker Boehner? / Yes. Others in the party are insaner.” But Trillin has held a range of interests throughout his career, and the book makes room for his critiques of high finance, satirical pieces about Jewish culture and self-deprecating pieces on his failures as a househusband: “A man who has a cross-indexed list of what’s in his basement is not a little too well-organized, he’s hateful.” His late wife Alice, the subject of his 2007 memoir, About Alice, makes regular appearances in the book, often as a forbearing housewife. Trillin is a topical humorist, which means many jokes haven’t aged well—why was Dick Lugar worth making fun of back in 1995? But the tone is always bright and genial, and gags about car alarms and corruption are deathless. More support, if any were needed, that Trillin is a leading humorist, even if some dust clings to a few of the essays and poems.