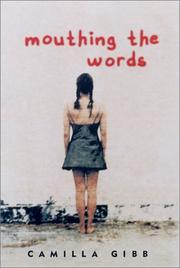 A rather disturbing comic novel by newcomer Gibb depicts an unhappy childhood in an oddly jolly tone. The narrator is one Thelma Barley, who begins her autobiography as a six-year-old in search of adoptive parents. Not that she’s an orphan, mind you, but her natural family leaves much to be desired. Her father likes to make her play “naughty secretary” (don’t ask), and her mother spends all her attention on Thelma’s baby brother Willy. So Thelma makes a point of asking any grownup who seems an improvement on her parents—which is to say, just about every grownup she meets—to adopt her. Later, as if things at home weren’t bad enough, the entire family moves from London to Canada, where Thelma doesn’t know anyone. Fortunately, she has several imaginary friends—one of whom is a horse named Heroin—who keep her company. But after a while, she has a hard time distinguishing the make-believe from the real—which is somewhat understandable, given how much nicer the make-believe is in every way. Somehow she grows up and goes to Oxford. That may not sound like such a happy ending, but you have to consider where she began: It’s actually quite a few steps up.

Brilliant and unsettling: one of the creepiest coming-of-age stories since The Butcher Boy.