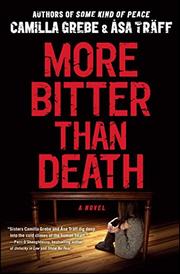 You wouldn’t think the murder of a mother whose 5-year-old daughter is a most unhelpful witness would have anything to do with a therapy group for women who’ve been in abusive relationships, and, outside the pages of fiction, you’d probably be right. But Grebe and Träff linger for so long on the dynamics of the latest group Siri runs with her partner, Aina Davidsson, that it’s only a matter of time before the crime is connected to one of the group members: Malin, who was raped on her first meeting with a new acquaintance; Sofie, who was beaten by her stepfather; Sirkka, who didn’t realize how abusive her husband had been until he was dead; Kattis, whose ex, Henrik, claims that she’s a pathological liar; and Hillevi, a pediatric oncologist who would have stayed with her violent husband if he hadn’t started beating one of their children too. And, in fact, the murder of Susanne Olsson turns out to have ties to more than one member of the group—a fact that leads to a truly shocking development halfway through the story. Unfortunately, matters proceed along more routine lines thereafter. Siri’s lover, Markus, isn’t happy that she’s shutting him out of her pregnancy. Siri finds herself getting maybe too close to one member of the group. The 5-year-old witness is kidnapped. Siri has to be rescued from a narrow brush with death.

Siri is an interesting heroine, but this case, like her debut (Some Kind of Peace, 2012), lacks the core of cold logic that fuels the best of the recent flowering of Scandinavian thrillers.