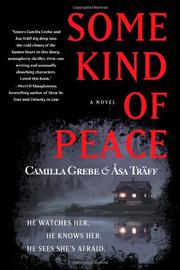 SOME KIND OF PEACE

Two Swedish sisters, a psychologist (Träff) and a thriller writer (Grebe), collaborate on—what else?—a thriller about a Stockholm psychologist. This novel was first published in Sweden in 2009.

In an ordinary week, the practice Dr. Siri Bergman shares with her friend Aina Davidsson and veteran therapist Sven Widelius brings her into contact with any number of disturbed patients, from Charlotte Mimer, the marketing manager struggling to overcome a history of eating disorders, to Peter Carlsson, an obsessive-compulsive tormented by violent and involuntary sexual fantasies. But the death of her patient Sara Matteus, who’s been cutting herself to avoid confronting her deepest pains and fears, falls outside even Siri’s often grim experience. To begin with, Sara was heartbreakingly young and alive. Her body was discovered in a pond just off a pier on Siri’s own suburban property. And contrary to preliminary indications, Assistant Detective Markus Stenberg announces that she’s been sedated and strangled. Given that her cat has disappeared, the power to her house has been cut, and her part-time secretary Marianne has been sent into a coma by a hit-and-run driver, Siri can’t help wondering if these misfortunes are more than coincidental. And indeed, her old school friend, psychology professor Vijay Kumar, agrees: Siri’s attracted the attention of someone who wants not merely to harm, but to kill her. But what possible motive could this someone have? And—since it’s clearly someone with intimate knowledge of her life, her past and her daily routine—who among her colleagues and patients, present or past, could it possibly be?

The levelheaded heroine adds welcome gravitas to the professional-woman-in-distress scenario, though the solution is a major letdown. First in a series.