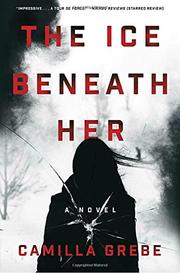 THE ICE BENEATH HER

Veteran co-author Grebe (More Bitter Than Death, with Åsa Träff, 2013, etc.) takes her first solo turn in this tale of three troubled souls linked by a horrific crime—and what a turn it is.

The discovery of a woman’s corpse in a Stockholm house is doubly eye-opening, partly because the place belongs to clothing tycoon Jesper Orre, famous for his wealth, hard-nosed bargaining tactics, and uncertain temper, and partly because the corpse’s severed head was “placed standing on the floor” to stare at newcomers. The crime is so outré that the closest parallel homicide detective Manfred Olsson can come up with is a cold case he and his partner, Peter Lindgren, worked 10 years ago, the beheading of temp worker Miguel Calderón. In the absence of other leads, Manfred persuades Peter, a train wreck of a man who’s particularly hard on women, to call once again on Hanne Lagerlind-Schön, the consulting psychologist who helped with that case. Manfred doesn’t know that Peter and Hanne have had a fraught history since then; neither detective knows that Hanne is now struggling with early-onset dementia. As if these aren’t complications enough, Grebe cuts repeatedly away from the investigation to focus on Emma Bohman, a salesperson at one of Jesper’s Clothes&More locations who’s swept off her feet by the boss—he meets her, takes her to bed, and proposes marriage—and is then carried along into a nightmare when Jesper improbably borrows an enormous sum of money from her and disappears from her life, only to return, evidently, while she’s out, steal a valuable painting, kill her cat, get her fired, and frame her for robbery. Each of these stories—Peter’s, Hanne’s, and Emma’s—is compelling enough to fuel an entire novel; Grebe’s skill in weaving them together is impressive.

A tour de force that lifts its author to the front rank among the increasingly crowded field of Nordic noir.