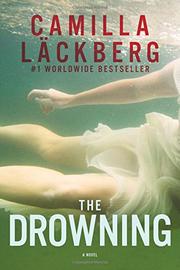 After publishing his debut novel to critical acclaim, Christian Thydell seems terribly anxious. Could his novel hold the clues to a mystery?

Bestselling Swedish crime novelist Läckberg (The Hidden Child, 2014, etc.) returns with another puzzle for Detective Patrik Hedström and his wife, writer Erica Falck, to solve. Now pregnant with twins, Erica has been mentoring Christian, and she’s alarmed when he faints before an important publicity event. At first Christian claims he’s tired and anxious about his childhood friend Magnus Kjellner, who disappeared three months ago. But under pressure from his wife, Christian confesses to Erica that he’s been receiving vaguely threatening notes ever since he began working on The Mermaid. Unfortunately, that’s all he reveals, and his unwillingness to help in his investigation piques Erica’s sleuthing instincts. She begins looking into things, first discreetly pocketing one of the notes to take to Patrik. Although he sees no obvious connection between Magnus’ disappearance and Christian’s letters, Patrik senses that there's more to the story. It seems Magnus’ other childhood friends Erik Lind and Kenneth Bengtsson have troubles, too. While Erik plots how to leave both his wife and his mistress without undue financial expense, Kenneth mournfully awaits his beloved wife’s imminent death from cancer. Although he, too, has been receiving ominous notes, Kenneth strangely keeps quiet. Läckberg excels at ratcheting up the tension by weaving this complex, fascinating, very dark mystery through the everyday lives of the unsuspecting residents of Fjällbacka, any of whom might be involved. And between each chapter tracing the investigation, Läckberg inserts the tale of a mysterious, adopted boy, who might have grown up to be another victim or the killer.