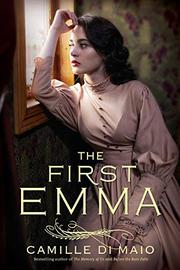 Di Maio’s (The Beautiful Strangers, 2019, etc.) take on a shocking American drama pleasantly blends romance and historical fiction inspired by the true story of a Texas brewing tycoon and his wife.

The year is 1942, and Americans are suffering from the effects of World War II. Nineteen-year-old Mabel Hartley has lost both of her brothers overseas, and her father—widowed, alcoholic, and deeply depressed—can’t support her, so she lives on her own and works as a secretary in Baltimore. Desperate for a new start, Mabel answers an alluring newspaper ad for “An aspiring female writer who is interested in recording the story that an old woman would like to tell.” From hundreds of applicants, she is chosen to travel to San Antonio to work for 83-year-old Emma Koehler, renowned businesswoman and wealthy widow of German-born Otto Koehler. The two of them become close as Mabel takes dictation from Emma, who shares the story of her tumultuous marriage, a disastrous automobile accident, and her fierce love for the Pearl Brewing company, which she led through Prohibition. Emma even shares the details of her husband’s scandalous death in the presence of his two mistresses, both nurses in the Koehler employ and both also named Emma. However, the defining attributes of her life are the drive and the acumen with which she’s steered her business, and Mabel takes an empowering message from her story. Meanwhile, living at the Koehler mansion brings her into the orbit of her employer’s extended family, and romance blossoms between Mabel and one of Emma’s young, male relatives. Mabel is a good-natured and resilient, if somewhat naïve, heroine. Her perspective offers interesting insights into the challenges of the period, such as wartime rationing and the prejudice against those of German descent. Despite the grim subject matter, the story is more lighthearted than many World War II accounts. Di Maio’s spirited writing carries the reader quickly through the narrative. The two storylines, alternating between Mabel’s perspective and Emma’s recollections, balance each other well.

A sweet memorialization of a real-life female business pioneer in San Antonio.