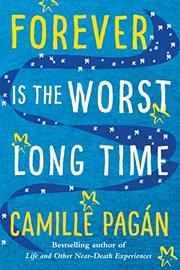 FOREVER IS THE WORST LONG TIME

A tale of love and loss, with some unexpected twists along the way.

When James Hernandez first meets Louisa “Lou” Bell, he instantly falls in love with her. Only trouble is, she’s engaged to his best friend, Rob. For James, a struggling writer and teacher, Lou is the ideal woman—a beautiful and thoughtful poet. As the years go by, James both obsesses over Lou from afar and watches as his own dreams of romance and success slowly peter out. When Lou and Rob’s relationship begins to waver, James can’t help but be there for Lou, attempting to rationalize away his betrayal of his childhood friend. Years after he first laid eyes on her, and with Lou and Rob’s marriage near its end, James finds out that his attraction to Lou is mutual. Pagán’s (Life and Other Near-Death Experiences, 2015, etc.) latest could have been a traditional love story but ends up far more complicated and heart-wrenching. Throughout the text, James addresses an absent “you,” whom he quickly identifies as Lou’s child. Though its format does at first provide more questions than answers, it is clear that he's telling his story—one of love and friendship, heartbreak and betrayal—with urgency. While the younger James and Lou feel slightly hollow, they do develop more complex personalities over time. What starts as merely James' obsession with Lou does eventually blossom into a more nuanced understanding of who she truly is. James begins the novel with a foreboding quote from Lou: “This story ends with loss.” And while this is certainly true of Pagán’s tale, it is thankfully both more complicated and more satisfying than that.

Relationships, both romantic and platonic, are in flux for all of these characters as they struggle to live without regret.