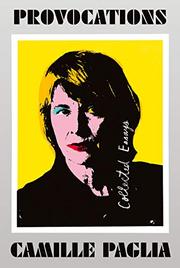 The scholar and culture warrior comes out swinging with an overstuffed omnibus that hits and misses in equal measure.

Ever since the publication of her extraordinary 1990 critical study Sexual Personae, Paglia (Humanities and Media Studies/Univ. of the Arts, Philadelphia; Free Women, Free Men: Sex, Gender, Feminism, 2017, etc.) has been somewhat of a split personality, and some readers may wish her two sides could be separated. Keep the artist/critic, the excavator of cultural mysteries, the scold of higher education, and the daunting interpreter of art and poetry whose book Break, Blow, Burn (2005) is a masterpiece; banish the self-promoter who often gets triggered by liberalism and feminism. The present volume, which collects the author’s work from Washington Post Book World, the Wall Street Journal, the Weekly Standard, ARTnews, the Hollywood Reporter, and many other diverse publications, is both brilliant and occasionally obnoxious. Paglia covers a vast swath of society and culture at large, including sections on popular culture, literature, education, art, politics, and more. She is still at her fiery intellectual best as a teacher, whether she’s throwing out odd but intriguing comparisons—Captain Ahab and Ziggy Stardust are both “scarred by lightning,” each “a voyager who has defied ordinary human limits and paid the price”—or deciphering poetry, happily butchering sacred cows along the way. (Wallace Stevens “ended his career with a laborious, plodding, skeletal style, employed in self-questioning poems of numbing length.”) Paglia loves classic rebels, including Dylan, Dalí, Picasso, Warhol, and the gay artist Tom of Finland, but she’s equally inclined to power. She writes fondly of Ayn Rand, a “bold female thinker who should immediately have been a centerpiece of women’s studies programs”; New York Mayor Rudy Giuliani (“I am frankly enjoying his assault on the arts establishment”); and Sarah Palin (“like Annie Oakley, a brash ambassador from America’s pioneer past”).

Your mileage, as they say, may vary where this shrewd cultural historian—and shallow contemporary observer—is concerned. Take it or leave it: This career retrospective is both maddening and essential.