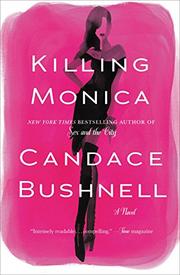 Bushnell (One Fifth Avenue, 2008, etc.) is still playing her Sex and the City riffs in this self-referential sort-of satire about an author whose insanely popular fictional creation has taken over her life.

PJ “Pandy” Wallis created her fictional alter ego, Monica—think Carrie Bradshaw on steroids—in four bestselling novels and the movies that followed. The problem is that her newest book is not about Monica. It’s about Pandy’s ancestor Lady Wallis Wallis, who arrived in America in 1775—and, according to Pandy’s agent and suspiciously intimate confidant, Henry, historical fiction is a hard sell, so her editor has turned it down. As Pandy ponders whether to give in and write another Monica book, she relives her career. Along the way she became best friends with the actress who played Monica on screen, SondraBeth Schnowzer. During their days of wild, often drunken gal-pal escapades, they called themselves PandaBeth. Their friendship, which has an unexplored homoerotic undertone, ended when hot actor Doug Stone slept with both of them. Despite the gaggle of indistinguishable friends surrounding her now, Pandy still misses SondraBeth. The last time they spoke, SondraBeth warned Pandy that her husband-to-be, celebrity chef/restaurateur Jonny Balaga, was not a nice man. SondraBeth was right. Jonny went through Pandy’s money and cheated on her. What’s worse, he couldn’t swim, liked contemporary furniture, and didn’t properly appreciate the pedigree of Pandy’s Connecticut family estate. She’s now divorcing him, but the settlement requires her to fork over the $1 million advance on her newest book. Without a book contract there won’t be an advance, and Pandy worries what Jonny will go after instead—possibly the rights to Monica herself. But how separate is Monica’s identity from jet-setting Pandy’s? Or Bushnell's, readers may wonder?

The book's portrayal of Pandy feels both self-congratulatory and unintentionally unpleasant, the hostility toward male characters is virulent—the only good male in the book may not be one—and the sense of humor is nil.