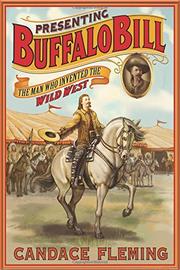 The Man Who Invented the Wild West

Fleming presents a lively, evenhanded portrait of William “Buffalo Bill” Cody, a master of self-promotion who became a world-famous entertainer and whose name became synonymous with “Wild West.”

When his abolitionist father died from a savage attack after delivering an anti-slavery speech in “Bleeding Kansas,” 11-year-old Cody herded cattle, worked on wagon trains, and rode for the Pony Express. He joined the anti-slavery Jayhawkers, served the Union during the Civil War, and worked as a civilian scout during the Plains Indian Wars. He earned the nickname “Buffalo Bill” for single-handedly slaughtering thousands of bison. Throughout her chronicle of Cody’s adventures, Fleming notes the ever present challenge of distinguishing the realities of Cody’s life, given his penchant for embellishment and outright fabrication. Fleming depicts Buffalo Bill as the first global superstar, whose lasting fame came as a result of his Wild West Show, which toured throughout the United States and Europe and featured fellow living legends Sitting Bull and Annie Oakley. Fleming also suggests without exploring at great length that the show did much to mythologize the “Wild West” in the popular consciousness, with many misconceptions persisting.

Illustrated with archival material and supplemented with extensive backmatter, this is a thoroughly engaging portrait of a fascinating, larger-than-life figure.