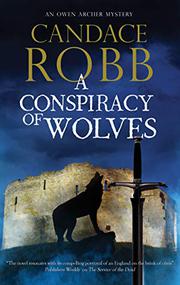 A CONSPIRACY OF WOLVES

A man with a deep sense of justice and a passion for crime-solving must make a series of life-changing decisions.

The year 1374 finds Owen Archer, former captain of the guard (A Vigil of Spies, 2015, etc.), still mourning the death of Archbishop Thoresby as he returns to York with his apothecary wife, Lucie Wilton; their family; and Geoffrey Chaucer, a spy for Prince Edward. Upon the road they meet Bartolf Swann, coroner of Galtres Forest, and Brother Michaelo, who was Thoresby’s secretary. Swann begs them to find the killer of Hoban, the son he claims was savaged by dogs or wolves. Hoban’s own dogs and horse are missing, and when Owen examines his body, he finds that although Hoban was indeed bitten, someone had cut his throat as well. Back in York, Owen is torn between the mayor, the aldermen, and merchants who want him to become captain of the city bailiffs and a more generous offer from Prince Edward, who’s invited him to become a member of his household so that he can keep an eye on the powerful northern families who are enemies of the throne. While Owen ponders his choices, he seeks information from several people and comes to suspect that Alisoun Ffulford, apprentice to Magda Digby, midwife, healer, and wise woman, is holding something back. Soon after a mysterious man with a large dog is spotted in the city, Bartolf Swann is found murdered. Owen becomes convinced that the Swann, Tirwhit, and Braithwaite families are all connected not only by marriage, but by a dangerous secret from the past that may provide the motive for the murders in the present. Real-life historical figures mix with fictional characters in a portrait of a deeply dangerous time that Owen must navigate with care if he’s to solve the murders and settle his own future.

History and mystery combine in a fine, complex tale of love and hate.