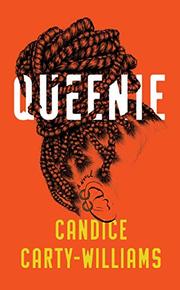 The life and loves of Queenie Jenkins, a vibrant, troubled 25-year-old Jamaican Brit who is not having a very good year.

" 'My last girlfriend was black.' I looked at my date and blinked, sure I'd misheard him. 'Sorry?' I asked, leaning across the table." But indeed, that's what he said. Just as she heard correctly when "Balding Alpha," a guy she dates later in her annus horribilus, licks her shoulder and comments, "Tastes like chocolate." Queenie's attempts to get over Tom, the long-term white boyfriend who dumps her at the beginning of Carty-Williams' debut novel, send her stumbling through a mined landscape of interracial dating and friendship, including the occasional white stranger who reaches to fondle her hair as if in a petting zoo. Terrified by the continual news of violence from the United States, Queenie is trying to get the paper she works for in London to cover important issues—"I’d wanted this job so that I could be a force for change"—but her editor responds to her pitches by suggesting a piece on "ten of the best black dresses Me Too movement supporters have worn at awards ceremonies." After all, it's the holiday season, and what people are really thinking about is party dresses! Queenie's main supporters are the three girlfriends who make up a texting group called The Corgis (a reference to the queen's loyal pack of pooches), but one of these relationships is about to detonate due to our heroine's wildly indiscriminate sexual choices, choices that keep her running in and out of the health clinic on a biweekly basis. At least she'll always be able to fall back on the judgmental embrace and reliable hot water of her ultratraditional Jamaican grandparents. Why she ever fell for that drip Tom and why she still loves him so much are never at all clear, but perhaps that's how these things go.

A black Bridget Jones, perfectly of the moment.