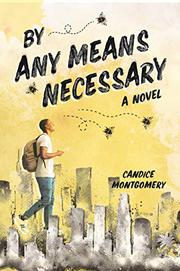 BY ANY MEANS NECESSARY

A college freshman reunites with an old crush and battles family obligations.

Torrence McKenzie is poor, black, and gay, and he has not had it easy; his father abandoned him as a baby, his mom is in a medically induced coma, the uncle who raised him was shot by police, and with no other family available, he has been living with his homophobic grandad. Torrey hopes San Francisco State University will be a fresh start—a true escape miles away from Baldwin Hills. But Torrey is barely moved into his dorm when his aunt calls to tell him that the beloved apiary his uncle left him is being seized by the city due to a failure to pay taxes. With developers pressuring him to abandon the bee farm and the deadline to drop classes looming, Torrey has to decide—this new beginning for himself or his uncle’s dream. The author breaks the fourth wall with quippy asides and shade as Torrey struggles to figure out what to do; sometimes it works and other times it’s distracting and feels more suited to formats such as social media or TV. At times the sequence of past events is confusing, but a diverse cast of supporting characters, including a biracial (black and Brazilian) love interest, is a strength of the book.

A fresh take on gentrification and the impact it has on both individuals and community.