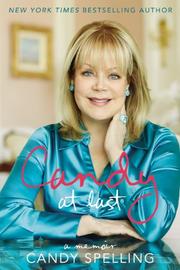 Depending on whom you ask, Aaron Spelling (1923-2006) is either a genius who helped chart a course for modern TV or a schlockmeister who completely destroyed the tube. The creator of Charlie's Angels, Beverly Hills 90210 and The Mod Squad was as visible as any TV producer around, so much so that the female members of his family became visible in their own rights, in part due to their own work (daughter Tori) and in part due to their proximity to the man himself (wife Candy). This kind of visibility inevitably leads to a book deal or two. Tori has pumped out a slew of titles, and Candy has written one of her own, Stories from Candyland (2009), a tepid memoir from a C-list celebrity whose claim to fame was her marriage. Unfortunately, her sophomore effort is similarly passable, a stale Hollywood memoir that is entirely paint-by-number: Here's my childhood, here's how I became famous, here are my famous friends, here are the obstacles I've had to overcome, and here's how I came out the other side a better person. This isn't to say that these books aren't sincere and heartfelt; they're just far too predictable, and that's the case here. Spelling fails to provide any great revelations, just pedestrian anecdotes about her famous friends (Dean Martin, Michael Jackson, Liz Taylor, Joan Crawford, etc.), a semi-candid dissection of her often rocky relationship with Tori and a recounting of her life after Aaron, in which she became a morning-news show fixture, a philanthropist and a producer. Though she’s clearly a kind, unpretentious woman, she's a peripheral figure, the person next to the person.

For hard-core Spelling (either Aaron or Tori) fans only.