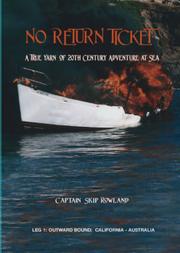 A True Yarn of 20th Century Adventure at Sea

Rowland’s debut memoir tells a tale of his seagoing trip to Australia, during which he braved storms, hapless crew members, and occasional supply shortages.

The author appears to have been destined for life on the water, as both his father and grandfather were sailors. After a tour as a U.S. Marine, Rowland worked as a salesman for 3M but dreamed of being an adventurer. He commissioned a naval architect to build his first boat, Love Story, but before he could set sail on a planned journey around the world, it disappeared from the marina. Rowland ultimately tracked down its thieves, but the boat, sadly, didn’t survive. By the mid-1980s, he was ready with a new vessel, Endymion, and in January 1987, he and his son, Tony, began their adventure from Newport Beach, California. (The author’s nurse girlfriend, Denise, was temporarily sidelined with an injury, he writes.) The sailors encountered surprising obstacles, including large hawks with the potential to damage instruments and a radio-silent vessel that appeared to attempt a collision with Rowland’s craft. Other people eventually joined the father-son duo on their travels, including Tony’s new pal Kyle; an attorney from Beverly Hills, California; and a hired couple that included another woman named Denise (the author dubbed her “the Amazon” to avoid confusion). The crew endured harrowing storms at sea, and some of its members’ lack of experience proved detrimental at times. But they persevered, spending leisurely hours on islands such as Bora Bora; later, Rowland’s girlfriend reunited with them. This nautical story is, rather appropriately, strongest when it’s at sea, particularly when squalls hit unexpectedly or unseasoned sailors cause problems without malicious intent. The author’s thirst for adventure is infectious, but he also takes solace in prayer, thanking God for his continued survival. He also does some things that may surprise readers, including a decision that has the potential to affect his relationship with his girlfriend. As an author, Rowland is sometimes too frugal with details, although he’s playfully apologetic when referring to a Bora Bora afternoon as “description-defying.” That said, the scenes aboard Endymion are memorable, and it’s sad to see a few crew members go after their shared escapades with the author. There’s intermittent comic relief, too, especially when high prices lead the crew to sacrifice their liquor.