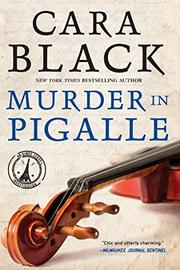 Pigalle in the 1990s is still very much a mixed quartier. Sex shops and seedy bars jostle family-owned stores and bistros whose owners live in small apartments above. 13-year old Zazie Duclos lives in one such apartment, perched atop her parents’ cafe. But Zazie wants to become a detective, not a shopkeeper. She haunts Aimée’s office on rue de Louvre, hoping to learn the secret of Leduc’s detective success. Then, suddenly, Zazie has a case of her own. A rapist has his sights set on the young lycée students in her neighborhood. Zazie borrows a high-resolution camera from a friend and takes pictures of a mec she’s been shadowing. Armed with a FotoFit of the suspect, she asks Aimée to help her investigate. Then she disappears. The attacks continue. Sylvaine Olivet dies after being assaulted. But neighborhood parents close ranks against Aimée: Mélanie Vasseur’s parents spirit her away to a clinic in Switzerland, the Olivets threaten to press charges against her, even Papa Duclos begs her to stop investigating. She doesn’t, much to the distress of her business partner, René Friant, who’s frantically ordering port-a-cribs for the office while Mélac, her baby’s dad, sits at the bedside of his critically injured daughter in Brittany. Although Madame Pelletier of the Brigade des Minuers insists that Zazie’s probably off chasing some boy, Aimée knows that somewhere in the stewpot of Pigalle, Zazie is waiting for her, the only person who can come to her rescue.

Black’s 15th shows Aimée just as determined as ever to live life on her own terms and stand up for those who can’t.