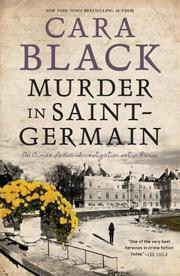 A job at the École des Beaux-Arts and a search for a Serbian lowlife combine to lead Aimée Leduc (Murder on the Quai, 2016, etc.) through the upscale part of Paris’ Left Bank.

With Leduc Detectives in a temporary office in the former 17th-century cloister now housing the famed art school, it seems natural enough for directrice Sybille to hire Aimée to investigate a case involving one of its professors even though Jules Dechard won’t tell Aimée what the case is about. All he’ll divulge is that he wants a list of all email sent to and from a particular address. Since her partner, René Friant, is a computer whiz, email snooping is child’s play for Aimée. So she has enough time to also help her old friend Suzanne Lesage, a former member of an elite counterterrorism squad. Suzanne’s convinced she’s seen Mirko Vladi?, a sadistic murderer blown up in Serbia, alive and well in Paris. The tabac where Suzanne spotted Mirko is right behind the Saint-Sulpice Métro stop, so Aimeé can check it out easily on her way from the office. But none of the Balkan émigrés who frequent the shop has seen Mirko. A lull in both her cases doesn’t mean a respite for Aimée, though. Like a bad centime, Melac, the father of her baby, is back, and Aimée can’t decide whether all the free babyproofing in the world is worth the heartache Chloé’s sexy, married dad may bring.

Black's detective is hitting her post-pregnancy stride, bringing up bébé while battling the bad guys with the best of them.