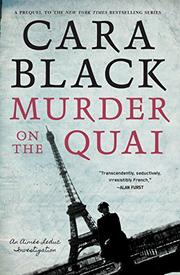 MURDER ON THE QUAI

In November, 1942, a line runs through the French countryside near Vichy. On one side lies Chambly-sur-Cher, in la zone libre; on the other, Givaray, under control of Maréchal Pétain. When a truck laden with Nazi gold gets mired in mud on the wrong side of the river, four Free French farmers kill four of the soldiers transporting the treasure to Portugal, stealing the loot for themselves. A fifth soldier apparently escapes. Sixty years later, an elderly man from the provinces is killed on his way home from a meal with friends in Paris, his body left under the Pont des Invalides. His daughter, Elise Peltier, asks detective Jean-Claude Leduc, a distant cousin, to find her father’s killer. But Jean-Claude is about to leave for Berlin to meet a man who can help him get Sidonie, his fugitive American wife, out of trouble with Mossad. So his 19-year-old daughter, Aimée, jumps into the breach. Frustrated with medical school and depressed to discover that Florent, her aristo boyfriend, is about to announce his engagement to another woman, Aimée is ready for new adventures. She scoops up the stray puppy her grand-père found by the river, christens him Miles Davis, and goes in search of the mysterious Suzy, who left her name and phone number on a matchbook in Peltier’s pocket from a club called LE GOGO. Along the way, she runs into a dwarf computer genius who fixes her pager. So begins the arc of Aimée’s story: the first corpse, the first clue, the first shattered love affair, the first meeting with René, her eventual partner, and the reader’s first glimpse of Leduc Detectives.

Rolling back the clock gives Black the chance to recast her heroine unencumbered by the baggage she’s accumulated over the course of the series. It’s not clear, though, where this prequel will take the franchise in the long run.