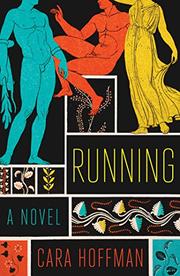 Three scrappy outsiders—inextricably bonded less by circumstance than by love—struggle to survive in the sweat-drenched underbelly of Athens’ red light district in the late 1980s.

“We were looking for nothing and had found it in Athens,” explains Bridey Sullivan in the opening pages of Hoffman’s (Be Safe I Love You, 2014, etc.) third novel. She is 17, smart and wild and self-contained, feral, a survivor. She has come to Athens to escape the bizarre trauma of her childhood, raised by a kindly doomsday-planning uncle, a smoke jumper, in the far reaches of Washington state. When she meets Jasper, a British expat, an Eton dropout, on a train, she is immediately taken in by his beauty; his is “the kind of elegant placid face you saw in old portraits.” Jasper’s boyfriend is Milo, another Brit, a teenage boxer from Manchester. They scrape by as runners—hustlers who trawl trains for tourists to entice back to dumpy hotels in exchange for their own rooms and board; in love with each other, they form a kind of family, drunken and desperate but free, tied to nothing, loyal only to their own. But their grimy, sweaty sort of equilibrium cannot last, of course, and when one of their money-making schemes links them to a deadly act of terrorism, the trio is forced apart. The novel, sticky with the stultifying heat of Athens, oozes backward and forward in time and place: gritty 1980s Athens, Bridey’s troubled childhood in Washington, and contemporary New York City, where Milo, now a successful poet, is in residence at the New School, drowning his sorrows in a never-ending stream of Four Loko. Crisp and immediate, the New York segments are a welcome contrast to the action in Greece, which is so beautiful and atmospheric that it sometimes feels as though it’s happening behind a screen.