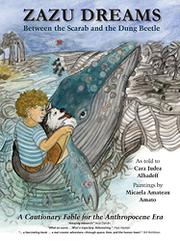 Between the Scarab and the Dung Beetle

In this illustrated fantasy, a boy and his imaginary dog travel via whale, learning about science, history, ecology, and more.

Zazu is a young boy with light-brown skin and curly hair; he has Sephardi and Mizrahi ancestry on his mother’s side, and African American (Barbados and India) on his father’s. Every night, Zazu travels back in time, visiting his ancestors whose diaspora took them all over the world, learning “history that we never hear about in school.” An especially wild escapade begins when Zazu and his imaginary malamute husky named Cocomiso travel by humpback whale from the present (2016) back through time to locations like the Rock of Gibraltar; Ouazzane, Morocco; the Caribbean; Kerala, India; the Persian Gulf; Shiraz, Iran; Babylon in ancient Mesopotamia; Salonika, Greece; and more. Along the way, Zazu has several kinds of encounters: learning Sephardic/Mizrahi history (such as that of the Caribbean-based Sephardic pirates who took revenge against the Spanish for the forced diaspora of Jews and Moors); meeting ancestors and cultural heroes (like pirate Capt. Moses Cohen Henriques Eanes and Jacques Cousteau); gleaning something about each stop’s culture and background; and, crucially, discovering facets of the global environmental crisis, including burning forests, mass extinctions, and plastic in the oceans. Just as important, Zazu is educated about remedies based on sustainability and an empathic understanding of how human actions affect the biosphere. To save Earth, people need (for example) “zero-deforestation agriculture and product chains, ethically shared seeds,” and “proper poop-use.” The last becomes an important symbol for how humans deal with waste. Zazu is given three poops: one kind warning of the dystopia to come; another serving as a guide to the present; and the third representing “poop for a hopeful future.” Though on the surface a children’s story, with a boy protagonist and fantastic exploits, this novel pitches much of its content to adult ears, backed up by an introductory guide, hundreds of notes, a chronology, and a list of additional resources for further study. The intent is frankly didactic; Alhadeff (Viscous Expectations, 2014) hopes that both kids and adults will see “the possibility of reconsidering consequences of one’s habitual daily choices.” Nevertheless, the tone is joyful and hopeful, and Zazu’s travels are often charming, surprising, and fun, especially when he gets to sample local pastimes and typical foods. The author is effective in showing the breadth, depth, and appeal of Jewish and Arab history, language, and culture. Amato (Uncanny Congruencies, 2013, etc.) provides attractive painted illustrations that have a naïve style but capture the book’s wide-ranging flavor. Given the tale’s enjoyable plot, delight in language, and timely message, it’s unfortunate that its credibility suffers from several questionable assertions (such as the danger of vaccines and the increase of amber’s “healing properties” due to deforestation) and some notes that contain unattributed quotations from other sources.

A mystical, magical adventure with a serious message that should spur conversations.