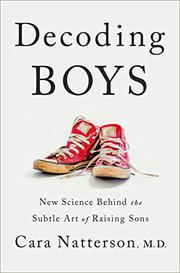 New Science Behind the Subtle Art of Raising Sons

A pediatrician leads readers down the fraught, confusing road of male puberty.

Pediatrician Natterson (Guy Stuff: The Body Book for Boys, 2017, etc.) seeks to “light a conversational route through puberty and adolescence while acknowledging that everyone travels a slightly different road.” Puberty, specifically, is the path to sexual maturity and reproductive ability, but it draws in its wake plenty of challenges and (mostly) minor crises. Natterson’s tone is comforting as she seeks to clue readers in, in terms of perspective and advice, on the physiological and emotional changes afoot. Central to the process of physical maturation and the making of men is the hormone testosterone, especially its role in the shutting down of communication by boys during puberty. This is critical, writes the author, because keeping open lines of communication is the single most elemental requirement for negotiating puberty. Somehow, find a way to communicate: “the silence can be deafening, not to mention dangerous.” It can be dangerous because puberty is full of land mines, and adolescent boys can simultaneously look smart and grown-up but still make numerous poor decisions. This has to do with brain maturation and hormones, both of which Natterson discusses in enough detail for readers to get a handle on the basic biology involved. Readers will learn about pertinent elements of the limbic system and the role of the prefrontal cortex without having to earn a degree in physiology. Sex plays a starring role, of course, and the author examines consent, pornography, and the many positive and negative avenues through which boys learn the “facts.” Natterson also addresses violent video games and guns, since puberty is a time of heightened emotions and aggression, as well as acne, body odor, unwanted erections, body hair, mood and voice changes, and wet dreams.

A common-sensical, gently humorous exploration of male puberty’s many trials.