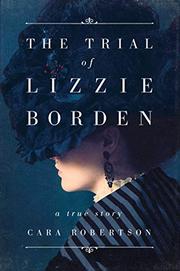 THE TRIAL OF LIZZIE BORDEN

A new history of the trial of the late 19th century: Lizzie Borden (1860-1927), accused of the murder of her father and stepmother.

Robertson, a former Supreme Court clerk and legal adviser at The Hague, amply shows how the wheels of justice often move slowly, by small steps. First, there was an inquest, in which Lizzie testified along with her maid, Bridget Sullivan. Lizzie and her sister Emma were estranged from their father and, especially, their stepmother. They were also jealous of property their father had purchased for his wife’s sister; attempting to mollify them, unsuccessfully, he had deeded another property to them. Accounting for her morning, Lizzie offered differing statements about what she was doing. With Emma visiting out of town, it was only Lizzie who had the opportunity to kill both parents, even hours apart. After the inquest came Lizzie’s arrest and imprisonment, where she exhibited a stoic demeanor that would carry her from the preliminary hearing through the trial. She was self-possessed and unruffled, ready to accept whatever fate dealt her. While she did break down a few times, as when her father’s skull was presented, for the most part she seemed confident and intent on following every testimony. Constantly whispering in the ear of George Robinson, her lawyer, she seemed to treat the trial as an exercise in controlling what the jury was allowed to hear. Robertson presents the story with the thoroughness one expects from an attorney, but she manages to avoid the tedious repetitiveness inherent in a trial by providing close looks at other contemporaneous elements such as Lizzie’s attempt to buy poison, a newly discovered hatchet, and the contradictions of the prosecution’s witnesses.

Readers are given every bit of evidence available and will be hard-pressed to reach a verdict; it’s fun trying, though. Fans of crime novels will love it.