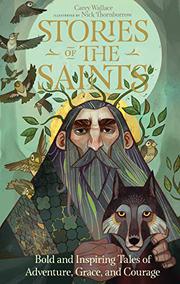 STORIES OF THE SAINTS

A modern book of the saints.

Wallace presents the stories, actual or apocryphal, of 80 men and women who served God so well that they were elevated to sainthood after their deaths, arranged chronologically from Polycarp (69-156 C.E.) to Teresa of Calcutta (1910-1997). Each two- to three-page account includes where the saint lived, who they are considered patron of, and their emblem and feast day. The saints included span centuries and cultures, including well-known figures such as Joan of Arc and Thomas Aquinas, more obscure ones like Mary of Egypt and John Nepomucene, and those from non-Western cultures such as Josephine Bakhita, who originally came from Sudan, and Martin de Porres, a mixed-race Peruvian of African and European descent. Wallace points out in her introduction that while some saints’ stories are historically documented, others, particularly the very early ones, are more along the lines of folktakes. “Just because we can’t be sure a story really happened doesn’t mean it isn’t true in another way.” That’s good, since some of them are frankly gruesome—Lucy with her eyes plucked out and handed to her on a dish, calmly reinserts them and can still see—as well as perplexing. Wallace presents them all with quiet confidence that the stories matter, and she convinces us that they do. Thornborrow’s illustrations combine traditional iconography with modern graphic art, effectively dramatizing each tale.

Unusual, well done, and useful in many settings. (Religion. 8-adult)