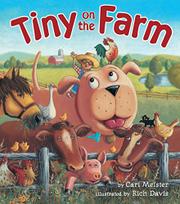 TINY ON THE FARM

The enormous and abundantly energetic Tiny, canine star of the team’s When Tiny Was Tiny (1999) and other early readers, takes center stage in his first picture book. In the short and simple story, Tiny and his owner Eliot search the farm to help Uncle John find his cat and her kittens. Davis’s illustrations are the draw here, rendering Uncle John as a comical adult version of Eliot; they even wear the same plaid shirt, blue overalls, straw hat and glasses. The adorable and inaptly named Tiny’s large, sweet doggie face displays a wide range of reactions and emotions as he and Eliot tour the farm. The little blue bird from the early-reader series flaps his way into this format, too; he figures in every spread, and readers will no doubt enjoy trying to spot him. A good introduction to Tiny, this one might also inspire those readers ready to strike out on their own to try the other offerings featuring their new favorite pup. Sure to appeal to fans of that other big dog too. (Picture book. 3-5)