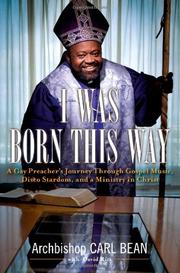 I WAS BORN THIS WAY

A Gay Preacher’s Journey Through Gospel Music, Disco Stardom, and a Ministry in Christ

by Carl Bean with David Ritz

With the assistance of Ritz (co-author: Brother West: Living and Loving Out Loud, A Memoir, 2009, etc.), Bean chronicles the story of his life as a minister and as the singer of the 1977 gay-liberation–themed disco hit, “I Was Born This Way.”

Born to a teenaged mother in 1950s Baltimore, the author was raised by neighbors and suffered an extremely difficult childhood. He was sexually abused at a very young age, by his foster uncle and by other men, and his birth mother died of complications from a botched abortion when he was a teenager. He also struggled with his homosexuality in a religious African-American community. After a suicide attempt at age 14, he came to accept and embrace his sexual orientation. He was also a devout Christian who went on to make a living singing in gospel groups, including the famed Alex Bradford Singers. In 1977, Motown Records asked him to sing the vocals for a disco song entitled “I Was Born This Way, which featured a memorable lyrical hook with a startlingly up-front gay perspective—“I’m happy / I’m carefree / And I’m gay / I was born this way.” It became hugely popular in dance clubs, but when Motown offered him a chance to follow up with an album of heterosexual love songs, he declined, not wanting to portray himself as someone he wasn’t. In 1982, Bean was ordained as a minister and opened his own church, the Unity Fellowship Church of Christ, which was accepting of all sexual orientations. (“God doesn’t care if you’re straight, gay, bi, or transgendered. God contains everything,” he preached.) He also established the Minority AIDS Project to help underserved AIDS patients in Los Angeles. Bean has certainly led a one-of-a-kind life, and his fast-moving, engaging memoir illuminates the 1960s and ’70s gospel world and provides the rare perspective of a homosexual minister. The early chapters, which detail terrible sexual abuse, can be harrowing at times, but the message is insightful and often powerful.

A worthy memoir for a truly unique individual.