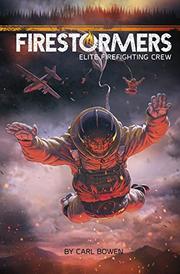 From the Firestormers series, volume 1

An elite troop of wildfire fighters drops in on an inferno with a lieutenant on his first command.

Bowen, who has a previous tightly woven thriller under his belt in Shadow Squadron: Elite Infantry (2013), tenders another taut piece of beyond-the-call-of-duty adventure. Here he introduces a cast that only rarely makes the headlines: fire hotshots, smokejumpers, firestormers, or, as the government bureaucracy would prefer: National Elite Interagency Wildfire Rapid Response Strike Force—the SEALs of the forest fire fight. The story, about battling a blaze in the Klamath National Forest, has moments of melodrama—“The blaze beneath oozed across the landscape with a hideous, gleaming magnificence”—and a rather stiff introduction of the characters’ backgrounds (there is a little too much chest puffing and unexplained psychological injury). But it is also full of good shoptalk for daredevils and gearheads, more excellent visualization (and forest-firefighting wisdom) than melodrama by a factor of five: “Fire flowed over a landscape like water—not downhill, exactly, but seeking out paths of least resistance.” Bowen handles gender issues with a good degree of diplomacy and sophistication but is less successful with race, giving readers little reason to believe that any of his characters are anything other than white. He also introduces an ethical quandary regarding Humboldt marten habitat, making it an issue, not just a pesky indulgence.

When the smoke clears, a group of characters emerges deserving a unique and universal respect.