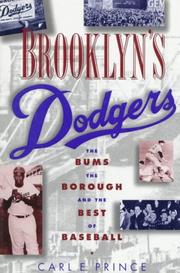 The Bums, the Borough, and the Best of Baseball
by Carl E. Prince
BUY NOW FROM
AMAZON
BARNES & NOBLE
GET WEEKLY BOOK RECOMMENDATIONS:

 Prince (History/New York Univ.) turns both an academic's and a fan's eye on the great love of his youth, the Brooklyn Dodgers. What is it about Dem Bums? Perhaps no other sports team has inspired such love, bordering on obsession, in its fans. No other team has inspired such lasting feelings of loss and betrayal by its departure from a community. Prince should be well equipped to answer the question of why this is so. He grew up in Brooklyn a diehard Dodger fan, the son of two diehard Dodger fans. This book, essentially nine interconnecting essays, treats the Dodger phenomenon from a variety of historical perspectives, touching the now familiar bases of current scholarship: race, class, gender, and ethnicity. In a racially, ethnically, and religiously balkanized borough, Prince claims, the Dodgers ``inject a generally soothing common ground.'' The team was also, he argues, ``the most overtly political sports team of the postwar decade,'' a judgment engendered not just by the presence of Jackie Robinson and its repercussions, but by the rabid anticommunism of the borough, a political stance in which the team willingly participated, with red-baiting Branch Rickey in the lead. At the same time, the Dodgers seemed an equally willing embodiment of the American ``melting pot'' in a town riven with ethnic tensions. Prince is a witty observer, and there are some interesting insights here, but too much of the book has a second-hand feel, and the author repeats himself from essay to essay. Any one of the essays in this book could be profitably expanded into a book of its own; as they stand here, they are just too slight. A slender volume that other diehard Dodger fans will undoubtedly want to own. If you rooted for anyone else during the '50s, skip it.