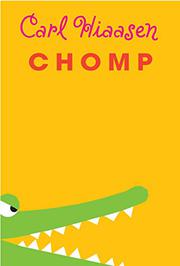 Lots of kids think they live in a zoo; Wahoo Cray actually does.

Wahoo’s dad, Mickey, was the best wild-animal wrangler in south Florida until an iguana, frozen solid in a flash freeze, fell from a tree and conked him on the head. Now, Mickey has migraines and double vision, and the family’s in such dire financial straits that Wahoo’s mother has taken a temporary job teaching Mandarin to American businessmen in China. When offered good money for the use of Mickey’s tame animals, there’s no saying no to the production company of Expedition Survival!, a “reality” show starring Derek Badger (actually a former stepdancer named Lee Bluepenny with a fake Steve Irwin Australian accent). The Crays, however, draw the line at harming any animal; and Derek doesn’t think the scenes are “real” enough. The production company hires Mickey and Wahoo as guides on an Everglades location shoot, which is complicated in true Hiaasen fashion by an abused, runaway girl from Wahoo’s class, a toothy encounter with a jazzed-out snake, a disastrously unsuccessful live-bat brunch…and a vanishing star. Hiaasen’s best for a young audience since Newbery Honor Hoot (2002) features a shy, deep-feeling protagonist who’s also a pragmatist and plenty of nature info and age-appropriate cultural commentary.

Humorous adventure tales just don’t get any more wacked…or fun to read than this.