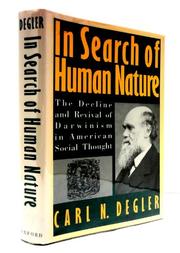 IN SEARCH OF HUMAN NATURE

The Decline and Revival of Darwinism in American Social Thought

The sobering conclusion one reaches at the end of this immensely informative and detailed history of social thought is that there is more to human nature than earlier commentators have imagined.

Degler, (American History/Stanford; At Odds, 1980) is marvelously adept at synthesizing paradigms past and present, quoting the prime movers in anthropology, psychology, biology, and other social sciences. Much of his test is devoted to a chronicle of the nature (biology) or nurture (culture) debate in relation to race, male/female differences, and intelligence. Darwin is seen as partly responsible for Social Darwinism and racism since he deplored the propagation of ``the weak members of civilized societies'' and despised the Tierra del Fuegans as savages. The swing away from biological determinism came with Franz Boas and his followers and later with cultural supremists such as Leslie White and Claude Levi-Strauss. In the decades between came the intelligence-testing movement, sterilization laws, behaviorism, the ``new syntheses'' of evolutionary biology and genetics, ethology, and sociobiology. World War II did much to counter racism, and the postwar years defeated behaviorism. Today, no one paradigm rules the roost, although Degler clearly sees value in the contributions of ethology and such ideas of sociobiology as inclusive fitness. His final chapters present varying contemporary interpretations of the incest taboo, male/female differences, and evolutionary theory in relation to sociopolitical thought. He concludes with conjectures on the evolution of culture itself, with discussions of the continuity from animals to man in self-awareness, planning, and even ethics- a discussion that leads him to conclude that some of Darwin's most radical ideas are only now coming to the fore.

Wonderfully written history that provides a challenging perspective on what it is (or what people have thought it is) to be human.