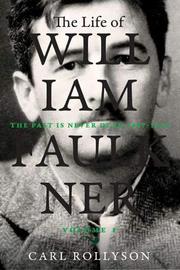 THE LIFE OF WILLIAM FAULKNER

A deeply detailed account of the 1949 Nobel laureate’s early life and work.

In this first of two projected volumes, Rollyson (Emeritus, Journalism and Creative Writing/Baruch Coll., CUNY; Understanding Susan Sontag, 2016, etc.) returns with a thick volume that accomplishes several objectives. It rehearses the details of Faulkner’s family history in Mississippi; examines many intriguing aspects of his early life (romances, drinking, difficulties making enough money, determination to write, public and private manner, friendships and professional associations); and assesses in great detail the major works he published during this time, The Sound and the Fury, As I Lay Dying, and Sanctuary among them. The author also deals frankly with some questions of Faulkner’s character, including his fabrications about his flying experiences (he underwent pilot training for World War I but did not go because the war ended before he could) and his evolving attitudes about race. Near the end of this volume, Rollyson examines Faulkner’s early experiences as a screenwriter in Hollywood, including analyses of the treatments and scripts he worked on—and how these would affect his subsequent fiction. Throughout, the author, an expert biographer, delivers arresting details and telling images from his subject’s life: Faulkner got a D in English at the University of Mississippi; he liked Charlie Chaplin movies and somewhat resembled the cinema star; As I Lay Dying appeared less than a year after he commenced writing it. Faulkner idolized Sherwood Anderson; though they became friends, their friendship eventually fractured. In Hollywood, Faulkner drank with Howard Hawks, and his literary friendships included Lillian Hellman (the subject of a previous Rollyson biography), Dashiell Hammett, and Nathanael West. The author’s underlying research is prodigious, and he does not hesitate to correct earlier biographers. General readers will find some of the book a bit daunting—especially the lengthy exegeses of literary works—but this is a top-notch biography nonetheless.

THE LIVES OF NORMAN MAILER
by Carl Rollyson
Newsletter sign-up