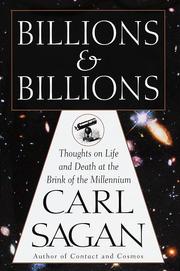 Thoughts on Life and Death at the Brink of the Millennium

The final book by the late science populist (The Demon-Haunted World, 1996, etc.) shows him in his role as one of the finest exponents of science for the general public. These brief pieces apply scientifc knowledge to the exploration of essential questions about the environment and the world's future in a disarmingly clear and charming manner. Sagan begins by pointing out that the phrase ``billions and billions,'' indelibly associated with him in the popular mind, is in fact a parody of his style invented by Johnny Carson—then he segues into a discussion of large numbers and scientific notation. In similar fashion, he extrapolates from TV sports to an examination of our species's hunter-gatherer origins, and from the fragile ecology of a small aquarium to that of our entire planet. Sagan's concerns always extend beyond a simple examination of whatever scientific principle he begins with; he is always ready to look into the human consequences of the ideas he discusses. Thus, a discussion of how exponential numbers grow evolves into examinations of population growth and the spread of AIDS. Sagan spends some time reconciling the missions of science and religion: Both relate to the ultimate welfare of humanity, and each, he argues, has something to learn from the other. Chapters on moral issues of global importance (such as the degradation of the environment), and reflections on our accomplishments as a species, including the prolonging of human life, the discovery and manipulation of the atom, travel into space, and unprecedented insights into the nature of the universe, attempt to capture an even longer perspective. In the final chapter, written after Sagan's discovery of his fatal cancer, he looks death in the face and declares his willingness to fight it. A poignant afterword by his wife, Ann Druyan, ends the book. Sagan was upbeat to the last, and a true believer in humanity's ability to transcend its worst impulses. This book captures his spirit at its best.