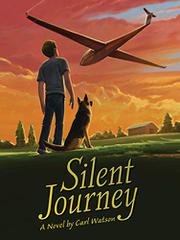 Thirteen-year-old Scott wants a place to belong, just like the abandoned dog he befriends one summer.

Ever since Scott’s mother died seven years ago, he has been deaf. A skilled lip reader, he communicates with his father using American Sign Language, but when his father leaves him with his stern grandmother in order to take an extended business trip, he struggles to connect. The stray dog becomes solace, traveling with Scott when he is then sent to live with an estranged uncle. Some might see Scott’s condition as conversion deafness, but this is not a book about the experience of living with this rare disorder, never named in the book. It is a book about a boy who becomes deaf after trauma, then is cured of his deafness as if by magic with a second trauma. Early in the story, Scott wishes that God would give him back his hearing. Instead of learning to accept his hearing loss, he is granted his wish. Scott’s use of ASL is depicted as a crutch that keeps him from bravely using his voice. In addition to this overused and offensive depiction of deafness, the narrative’s pace and tone are uneven. Watson raises the stakes exponentially in the last act, and the ending is surprisingly tragic. Scott and all the important characters are presumed white.

Authentic depictions of Deaf child characters are vanishingly few; this does not add to that small number.