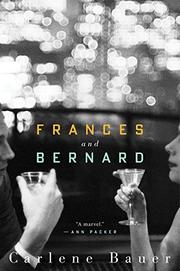 When Frances and Bernard meet at a writers’ colony in 1957, they develop a tentative friendship. Frances, a middle-class young woman from a loving, boisterous family, is stoic and undemonstrative. Bernard, the product of a privileged background and a Harvard alumnus, is unpredictable and outgoing. While seemingly polar opposites, they remain connected through their letters and spend years discussing everything from their tastes in music to their religious beliefs, their lives and the books they write. Bernard’s a poet while Frances writes fiction; they describe themselves as the epitome of square, but their letters, while boring and full of obscure references and stilted wording, come off more as condescending and pretentious than square. Both write as if they’re throwbacks to the Victorian era—at one point Frances informs Bernard that she retires to her chamber at night while her family watches television—which might explain their attraction to each other. Frances eventually moves to New York City, and Bernard visits her. Together, they explore the city. Then Bernard makes a huge mistake: He catches Frances off guard and kisses her, and she’s not exactly pleased. It takes several more letters and a breakdown on Bernard’s part before Frances finally admits she loves him. But both face difficulties and waste a lot more ink as Bernard struggles with mental illness and Frances copes with family crises before the final letter is completed. There’s no doubt Bauer is well-educated and passionate about her religious views, her love of literature and her characters, but her attempts to create stimulating spiritual and intellectual dialogue feel forced. The characters are too wrapped up in themselves and totally ignore anything outside their narrow personal spheres. How can they not once mention one word about the space race, Elvis, the Beatles, JFK’s assassination or Vietnam (just to name a few of the social and political events that occurred) during their 11 years of correspondence?