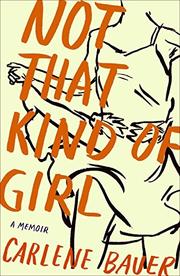 NOT THAT KIND OF GIRL

Bauer’s relatable but unremarkable debut memoir describes growing up and attempting to define herself while also keeping her faith in God.

Raised in the New Jersey suburbs during the 1970s, the author received an “accelerated Christian education,” primarily from Old Testament stories, in a school operated out of a church basement. She was taught that she should put her self aside to serve God, and warnings about imminent Armageddon made her an anxious, fearful child. Her peers at Christian school were told to avoid television and radio, but she watched MTV and loved rock ’n’ roll. Skeptical of religious fanaticism but still holding tight to her faith, Bauer wittily reveals the insufficiencies and insincerities of church and Christian paraphernalia. In high school and college, she observed the world of drinking, sex and drugs but did not partake. She dated boys and attended frat parties for “research” purposes while seeking guidance from authors like Sylvia Plath and Virginia Woolf. Virginal and sober, she discovered a love of poetry and the possibility of living a faith-based life with some flexibility, but she remained shy and insecure. She moved to New York City, aspiring to write and to create a new identity. She dug deeper into religion, society and herself, but repeatedly came back empty-handed. After sampling different denominations and ways of living, she finally gave up on the church and, later, God. As Bauer describes a slew of failed relationships, characters come and go too quickly for attachment, and the book devolves into a stream-of-consciousness narrative occasionally interrupted by events. Sarcasm and dry humor give way to a more desperate tone as her search for meaning becomes harder and her list of questions longer. She never finds any real answers, and readers may find themselves as confused and discouraged as the author.

Sassy societal commentary muddled by a lack of cohesion or a satisfying conclusion.