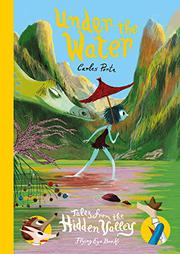 From the Tales from the Hidden Valley series

The annual celebration of Dragon’s Day to mark the beginning of summer is very nearly spoiled once again for the residents of Hidden Valley when all the fireworks disappear.

It’s really just a misunderstanding. Emerging as she does once a year from the lake, blue-skinned Aqua—described as looking “just like a mermaid” but with legs rather than fins in the illustrations—secretly gathers up the fireworks and other unattended treasures to keep them safe. When Yula, Ticky, and the other residents (who are drawn as diverse, anthropomorphic woodland creatures) confront the supposed thief, she swims off in a rage. Then her pursuers follow in a fishlike submarine they find that’s named Olivier—but are swallowed by the supposedly legendary dragon that had been sleeping at the bottom of the lake. High feelings turn to warm ones after everyone in the valley is treated to a spectacular display as the surprised dragon rises up, spouting a fountain of multicolored rockets (turns out Aqua had hidden them in the sub). Porta brings the ungainly charm of his three previous seasonally themed Hidden Valley outings to this (probable) closer, filling out the ensemble cast with further unconventional characters and leaving Aqua, Olivier, the dragon, and all the rest gathered at a festive banquet beneath moonlit trees.

Completes a seasonal round with dashes of mystery, adventure, and conflict resolved in a wash of bonhomie…plus some big explosions.