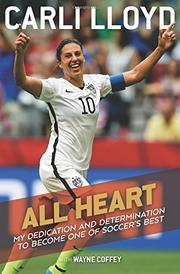 My Dedication and Determination to Become One of Soccer's Best

In this young readers’ adaptation of her memoir for adults, When Nobody Was Watching (2016), Lloyd seems to remember with total recall every game she’s ever played, recapping them in a direct, detailed, blow-by-blow manner that is sure to confuse anyone who isn’t as into soccer as she is. Of course, her audience is likely to be a self-selected one. But soccer detail isn’t the only reason to read this book. All too often, it is easy to look at heroes of many stripes and think that success came to them easily. Lloyd makes it clear that her path was never easy, never without commitment, never without sacrifice, and, most of all, never without discipline and a lot of hard work. Her path covered a lot of ups and downs, and there were key people along the way who made her success the eventual inevitable goal…along with those who deserted and disappointed her. Narrating in the first person, Lloyd is frank about such difficulties as her estrangement from her family, telling readers, “I don’t hear from any of them after the [2012] Olympics, though they do send me a card. I can’t believe it has been four years since we’ve had any relationship to speak of.” True to real life, her story does not unfold neatly, with a clear narrative arc, but her character comes through loud and clear.

Not for lovers of soccer only: readers after inspiration to keep playing, regardless of the odds, will find plenty here.