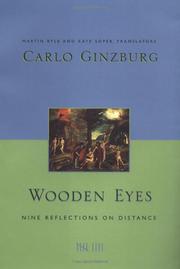 How far from an object or event do we need to be to see it clearly? In nine connected essays, noted Italian intellectual Ginzburg ponders the nexus between distance and vision and thus explores the relationship between the difficulties of objectivity and the confusions of subjectivity.

From this stimulating starting point, Ginzburg (History/UCLA and Univ. of Bologna; The Cheese and the Worms, not reviewed, etc.) acts as intellectual cicerone for an arty/smarty jaunt through the ages. The heavyweights of the western tradition are trotted out, poked, pondered, and plundered as he teases new insights from an impressive array of materials. The scope of his primary sources—philosophers from Aristotle to Adorno, authors from the gospel writers to Proust, artists from Caravaggio to Magritte—befits a thinker of dazzling erudition and innovative brio. Chapters typically begin with a quick distillation of a moment of cultural concern, such as Pope John Paul II's apology for Catholic anti-Semitism, third-century Biblical scholar Origen's “Homilies on Exodus,” or Alan Sokal's postmodern hoax in Social Text that rocked the ivory towers of academia in 1996. Ginzburg stitches one thinker to another, piecing together a world of disparate geniuses into a unified analysis of human perception. In one of many memorable passages, he analyzes the moral implications of proximity by probing a moment from Balzac's Le Père Goriot, in which two characters muse over the necessary emotional distance to commit murder. He persuasively argues that questions of distance and perception are inextricably tied to matters of myth, morality, conscience, deceit, representation, and culture. Ginzburg's work represents the finest in philosophical musings, as he coaxes the reader into new perceptions of the seemingly simple concept of distance, which he renders startlingly fresh.

His breadth is intimidating, his depth daunting, and his conclusions staggering. (26 plates)