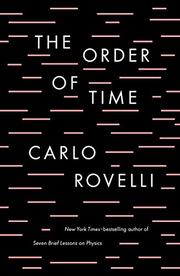 THE ORDER OF TIME

Undeterred by a subject difficult to pin down, Italian theoretical physicist Rovelli (Reality Is Not What It Seems: The Journey to Quantum Gravity, 2017, etc.) explains his thoughts on time.

Other scientists have written primers on the concept of time for a general audience, but Rovelli, who also wrote the bestseller Seven Brief Lessons on Physics, adds his personal musings, which are astute and rewarding but do not make for an easy read. “We conventionally think of time,” he writes, “as something simple and fundamental that flows uniformly, independently from everything else, uniformly from the past to the future, measured by clocks and watches. In the course of time, the events of the universe succeed each other in an orderly way: pasts, presents, futures. The past is fixed, the future open….And yet all of this has turned out to be false.” Rovelli returns again and again to the ideas of three legendary men. Aristotle wrote that things change continually. What we call “time” is the measurement of that change. If nothing changed, time would not exist. Newton disagreed. While admitting the existence of a time that measures events, he insisted that there is an absolute “true time” that passes relentlessly. If the universe froze, time would roll on. To laymen, this may seem like common sense, but most philosophers are not convinced. Einstein asserted that both are right. Aristotle correctly explained that time flows in relation to something else. Educated laymen know that clocks register different times when they move or experience gravity. Newton’s absolute exists, but as a special case in Einstein’s curved space-time. According to Rovelli, our notion of time dissolves as our knowledge grows; complex features swell and then retreat and perhaps vanish entirely. Furthermore, equations describing many fundamental physical phenomena don’t require time.

As much a work of philosophy as of physics and full of insights for readers willing to work hard.